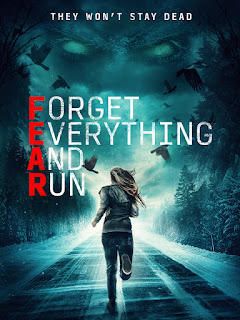 Although Reisner and Tobias's debut feature sets its stall out as a post apocalypse zombie thriller, for much of its running time Forget Everything And Run (aka F.E.A.R.) is basically a contemporary (horse free) western with a family drama at its heart.

In true B movie style (ie using text crawl to describe events there isn’t the budget to depict) a viral sickness has spread across the country, forcing the military to build a wall to cut off the infected. Many families have fled to the snowy north to safety, the cold having a detrimental effect on the largely absent zombies, and the film focuses on one family, the Allisters, as they struggle to stay alive.

The family are mum and dad, Josephine and Ethan (Marci Miller and co-director Tobias) and their kids Josh and his older sister Mia (Danny Ruiz and Cece Kelly). A series of flashbacks, from Josephine and Ethan meeting, to scenes depicting the family in happier, pre-pandemic times, contrast with the tired figures of mum and dad trying to protect the children; Mia has become infected and lies upstairs on a makeshift life support system in the Allisters’ squalid hideout, but the parents hope to find a cure.

The fragile life of survival carved out by the family comes under threat when a group of weaponed up looters attack them, and a tense stand off develops between the two parties. A captured military guy discloses that a corrective serum exists and that the infection is man-made; the quest is on to recover the drug and for the Allisters to stay alive.

While there are some intense performances on display which elevate the film above its flat made for TV look (like something the Syfy channel might serve up), particularly Ruiz as frightened son Josh and Susan Moore Harmon as the cantankerous looter Desiree, this is otherwise thin stuff that promises more than it offers; “They won’t stay dead” suggests the poster tagline, but the undead really only crop up briefly at the beginning and end of the movie. Otherwise this is best seen as an intense human drama, and the crises they face (a wall and a pandemic) suggest that some political points are being offered up as well, if not particularly subtly.

Email ThisBlogThis!Share to TwitterShare to FacebookShare to Pinterest
Labels: Forget Everything and Run