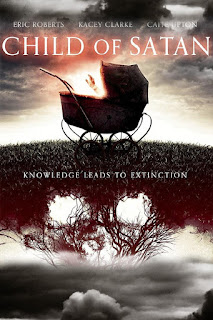 A quick toddle around the internet will tell you two things about Child of Satan: firstly its distribution history. This 2016 movie was originally marketed with Rosemary's Baby in mind (including telltale baby carriage on the cover), but was then repackaged under the alternative name Neron, with the tagline 'Knowledge leads to extinction' - no, me neither. In the latest release the pram is now back, as is the original title, but with the Neron strapline. No, still none the wiser.

The second thing the world wide web will tell you is that no-one, but no-one has a good word to say about the movie in either of its guises.

Director Patel's previous feature, 2011's The Man in the Maze, seems to have been beset by the same problems encountered in Child of Satan: well photographed but shoddily edited, incomprehensible plot, and with a script not so much written as fought over by committee. But five years is a long time not to learn from the errors in your first movie.

In Child of Satan a heavily pregnant Allison (played by the UK's own Kacey Grange Hill Clarke) almost miscarries at her baby shower, which may have something to do with an eclipse taking place at the same time, deemed as an ill omen. The baby is born premature if healthy, but exerts a strange demonic influence on those looking after it - calling it Neron probably didn't help. The cause of the diabolic kerfuffle may be traced back to the father, Kevin, being involved in some voodoo business in Mexico five years previously (and who is still up to his old tricks carrying on with Allison's best friend Tara (Caite Upton, formerly Miss South Carolina Teen USA 2007) behind her back. As the baby grows in strength a string of fatalities occurs, but the evil bambino resurrects the fallen as zombie slaves to realise its grand plan - whatever that is. An increasingly disturbed Allison does not know where to turn, until she encounters a priest who may or may not be of this earth (a rather bored looking Eric Roberts) and who offers her Christian salvation in the form of a very big knife.

Patel and Son's film feels like it was rescued in the editing studio, and with no fewer than nine producers on board, it's kind of a surprise it got made at all. It's unfair to say that the movie makes no sense although several plot strands do kind of disappear and the whole thing feels like it's been held together by a wing and a prayer. And on that subject, initially I thought that because of the pronounced good vs evil plot it may have been church funded (although the uttered line "Fuck off you homewrecking cunt!" suggests not). The SFX are a triumph of lo fi-ness, and it's a shame there aren't more of them as, basic though they are, they are intriguing (depicting blood spray by animating it onto the lens of the camera filming the action anyone?). But all round this was very hard work even for a genre completist like me.
Posted by Dark Eyes of London at 05:59