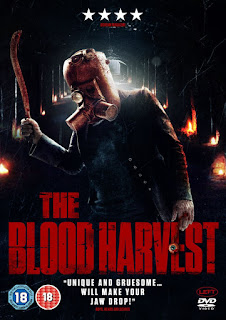 A selection of reviews that either didn't make it to 'print' or are no longer available.

The Blood Harvest (UK 2016: Dir George Clarke) - director/writer/producer Clarke’s latest movie is a solid two fingers up to people who don’t think that films shot on DV can be any good. The Blood Harvest is a tense cat and mouse thriller with creative and occasionally stomach churning gore scenes, a solid cast and great use of rural locations. It also looks way better than its estimated £10,000 budget would suggest.

A serial killer is stalking the countryside of County Down in Northern Ireland. Not only does he wear a strange mask while murdering his many victims, but he cuts their Achilles tendons and eats their eyeballs too – using a fork, no less. Chaplin, a cop who has been sacked but is still determined to solve the case, specialises in mythology and thinks that the killings may be the work of a vampire (the truth turns out to be odder than that).

His former partner Hatcher suspects a more prosaic motive, but it’s in his interests to put Chaplin off the scent. Separately the two cops close in on the killer’s (or is it killers plural?) country hideout, where Chaplin learns the strange truth both about the murders and his partner.

I confess to not having seen Clarke’s previous films, but on the basis of The Blood Harvest I’ll be rectifying that as soon as possible. This is a really inventive movie which starts at a breakneck pace with the rather disturbing murder of a young girl, and doesn’t let up even at the jaw dropping denouement. It’s a tightly edited film which builds the tension well, and it’s not a movie that is afraid to be out there. I liked it a lot – highly recommended. 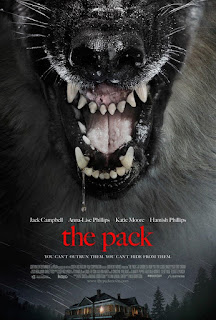 The Pack (Australia 2015: Dir Nick Robertson) - films about dogs who’ve had a rethink on the whole ‘man’s best friend’ concept have been around for a while. Back in 1977 a movie also called The Pack had a load of dogs made angry by being abandoned by their owners. 1982’s superior White Dog dealt with a racist German Shepherd, and of course there was rabid Cujo who gave Dee Wallace a hard time in the 1983 adaptation of the Stephen King book. 2006’s The Breed had a bunch of similarly infected pooches chasing after partying teens and 2014’s White God had more dumped beasts getting annoyed.

The difference between those movies and Nick Robertson’s debut feature The Pack is that the dogs in this film aren’t programmed, necessarily abandoned or infected to the best of our knowledge. There are just a lot of them and they’re aware that they can throw their weight around with a bit of canine organisation.

Carla and Adam Wilson are having a tough time of it having recently moved to their farm in the Australian outback, which doubles as the local vets. Carla’s been treating a lot of stressed dogs recently and Adam is getting fed up with finding butchered sheep on his land; their kids are similarly cheesed off with their new rural existence and the mortgage company are threatening foreclosure. It’s all rather tense. As night falls a power cut plunges the farm into darkness and a pack of wild dogs seize their moment to launch an attack, forcing the Wilson family to fight for their lives.

That’s about it plot wise. Robertson doesn’t spend much time developing the characters of the family members, choosing to devote most of the film’s running time to the canine siege and generating quite a bit of tension in the process. The power cut makes things very Assault on Precinct 13, and he is clever not to show too much of the beasts, largely keeping the threat in shadow. Real trained attack dogs were used for the most of the scenes (the cast were apparently genuinely afraid of them) combined with sparing use of model work and almost unnoticeable CGI.

Apparently attacks of this nature are a growing problem down under, so this movie will probably have an additional frisson for Australian audiences. While I appreciate the assurance of the direction (not bad for a feature first timer) I didn’t really feel much of a threat - the family have guns for crying out loud - but their ethical code initially delays them inflicting any harm, and the dogs rather unrealistically spend a lot of time stalking when they probably would just have gone for throats. However I liked Robertson’s nod to the cinema of nature gone wrong (particularly the Aussie movie The Long Weekend) in his combination of animal sounds and well photographed outback scenery, and the refusal to explain why the dogs acted as they did. 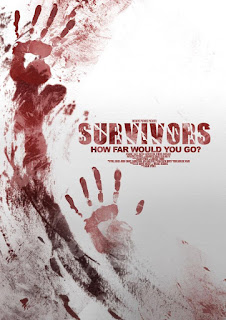 Survivors (UK 2015: Dir Adam Spinks) - Spinks’ first full feature, 2014’s Extinction, was a valiant if overlong attempt to do something different with the found footage genre, featuring a group of explorers travelling deep into the Peruvian jungle (actually a well disguised Welsh countryside) and uncovering a nest of dinosaurs. Two years on and Spinks is back with more found footage action in Survivors, although this movie had actually been made before Extinction, but took nearly two years to see the light of day via a Crowdfunding initiative which helped stump up some of £10,000 budget.

As the title might suggest Survivors tells the story of the aftermath of a viral attack, centred around Kate Meadows, a journalist trying to get to the bottom of a story about human drug testing behind closed doors, and the potential after effects of the trials. This is cleverly cut with scenes clearly set following a viral outbreak, showing that the inevitable has happened. Spinks is much less concerned with showing us scenes of the infected on the rampage than the human cost incurred by those left coping in the wake of the event. Similar to the BBC series of the same name which is surely an influence here, it isn’t long before certain people assume dominance and power, when clearly the population should be uniting (an optimistic politician’s voice is heard on the radio talking about how the country will be able to pull together and recover from the infection, but having seen some of the characters in the movie that looks extremely doubtful).

As in Extinction some of the actors are much better than others (with so much acting talent out there I’m not sure why directors end up casting people who are so terrible at conveying character or emotion) but there is a sadness and fatalism in this movie that I wasn’t expecting. Unleavened by any real action it’s quite a depressing experience, enhanced by Buz Kohan’s sweeping melancholic score.

I’m not sure whether I really liked Survivors but maybe that’s the point. It certainly punches above its low budget origins though - and Spinks is an interesting director who clearly invested a lot of thought into this movie and is well worth watching. 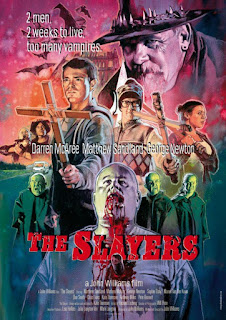 The Slayers (UK 2015: Dir John Williams) - £15,000 in the hands of some movie directors will buy you lunch and maybe half an hour in the editing suite. Given to film maker John Williams it can net you a whole comedy feature film, as this is what The Slayers cost to make – all 1 hour and 40 minutes of it.

Nigel and Job are both members of a cult embracing the soon come arrival of a comet that will wipe out the world. When their Jim Jonesesque leader advocates drinking poison and the congregation duly oblige, Nigel and Job choose life. Faced with two weeks to go until the end of the planet, they make up a bucket list and proceed to tick it off. This list isn’t particularly startling though, including things like ‘going fishing’. However their life of relative hedonism is ruined when they run into a gang of vampires and a crusty vampire hunter.

The Slayers is half The Inbetweeners and half Dumb and Dumber. Nigel and Job are an Abbott and Costello for a new generation, and it took me a long time to appreciate Abbott and Costello. Williams’s film is inventive, fast paced, but…wait for it…not very funny. Sorry John, maybe I just wasn’t in the mood for the pratfalls, goofiness and occasional The Mighty Boosh touches. Sure, I bet it was a lot of fun to make, and the enthusiasm of the cast (who include the director in five different parts, the 2014 winner of Britain’s Strongest Man and ‘troubled’ 2006 Big Brother victor Pete Bennett) shows through. It’s nicely filmed, showing off the Stoke-on-Trent locations well, and the special effects are amazing considering the budget. But at over an hour and a half it very much outstays its welcome, although it does become much more interesting once the vampires show up. Apparently fifteen minutes of the film were trimmed after the first screening, so I’m not sure if I’ve seen the longer version, or it originally ran for nearly two hours (!).

Ultimately whether you go for The Slayers (and I’m sure there’s an audience out there for this) depends on how many people you’re watching it with and in what state you are when you do. I’m sure Williams would be the first to say “Look, we’re not making Kurosawa here!” but I didn’t find Nigel and Job a particularly appealing pair of layabouts, and The Slayers spends an awful lot of time in their company.
Posted by Dark Eyes of London at 05:07