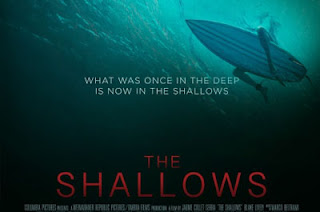 I'm not ashamed to mention that I've enjoyed all of Jaume Collet-Serra's movies, from the gloopy fun of House of Wax (2005) via the audacious but extremely watchable Orphan (2009) to the pensioner action antics of Liam Neeson in Non Stop (2014) and Run All Night (2015). So yep, I'm a fan. His latest stripped down essay in tension featuring one woman and a shark is a thoroughly diverting not quite hour and a half, slicker than it has the right to be, and quite the thrill ride when it gets going.

Medical student Nancy visits an out-of-the-way beach which holds sentimental value for her as one of her late mother's favourite places. Brought up surfing on the lakes of Texas (!) our heroine soon proves that she's more than a match for the massive ocean waves, impressing fellow surfers who warn her about the sharp corals - so we know they'll come into the equation later on. What they don't tip her off about, largely because they're unaware of its existence (rather odd for seasoned water jockeys), is the presence of a great white shark, in whose feeding ground Nancy is blithely surfing. Trapped on a rock after the shark bites her leg and with only a plucky seagull for company, she must work out a way to get back to the beach before her attacker closes in for the kill.
The Shallows delights in putting its heroine through the wringer for most of the film's running time, with a full-on physical performance by Gossip Girl's Blake Lively (apart from the bits where her head is dodgily grafted onto the body of a real surfer via CGI), and in administering some nasty wounds (shark and coral) when it looks like she may just be winning her woman v. beast battle. That Lively has to survive dressed only in a bikini and sometime wet-suit is I suppose a given, although Collet-Serra is gentleman enough to minimise the lascivious body tracking shots you'd expect in a good old exploitation movie.

But how much is this an exploitation movie? The film's rather over-processed look makes the whole thing appear strangely comic book in execution - I think we're in PG-13 territory again. Sure it's tense, but it steers away from the reality of say Chris Kentis's Open Water (2003) or even Andrew Traucki's 2010 The Reef (filmed, like The Shallows, in Australia) to present a danger-lite version of the shark threat movie where even the obligatory self-surgery carried out by Nancy on her leg bite is diminished by virtue of the fact that as a trained nurse she knows what she's doing.

The shark itself is quite an impressive bit of CGI and Collet-Serra's decision to use it sparingly is decidedly in its favour (I surely don't need to mention another shark movie that didn't learn this lesson). It's a testament to Blake Lively's performance that about the only non human she physically gets to work with (ie that wasn't created in post production) is the seagull, appropriately named Steven, whose comic timing is, wait for it, impeccable.
Posted by Dark Eyes of London at 05:02