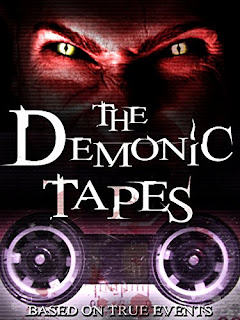 You're never that far from the gothic or the classic ghost tale with Richard Mansfield's work, whether he's giving us faithful adaptations of M R James stories via his shadow films, or contemporary live action movies containing more than a whiff of classic supernatural fiction.

In 2016's Video Killer urban paranoia loomed large among strange visions and spectral followers. The rather luridly titled The Demonic Tapes - a title which perhaps unfairly masks a much more subtle film than that - is also set in contemporary London, and was filmed very quickly over a three day period on a budget of about £400.

The Demonic Tapes is the supposedly true story of an unnamed man, staying alone in a north London house share in the days leading up to Christmas, who discovers a box of audio cassettes in the basement. These tapes record a series of sessions involving a medium and a former resident of the house. Our current resident listens to the tapes increasingly obsessively, and realises fairly quickly that the haunting documented on them - and the death of the medium on the tapes - has taken place in the same house in which he's currently living. As the cassettes' hold on him deepens, he starts to see and hear things in the rooms upstairs, suggesting that the demonic presence caught on tape may be back in the house.

Perhaps befitting the brief shooting time The Demonic Tapes didn't have quite the same impact that the more ambitious Video Killer had when I first saw it. But I have to congratulate Richard Mansfield on conjuring something interesting out of not much at all; whether it's tricksy camera shots - from within a kettle and bath while being filled, for example (very giallo) - or the use of the crumpled animated bedsheet twitching on the floor or rising slowly from bathwater (a nod to the BBC version of the M R James story Whistle and I'll Come To You). And the pre Christmas time setting (announced in a series of title cards) is surely a reference to the classic 1973 film The Legend of Hell House which uses the same device.

"I feel like I'm listening to something I shouldn't be" says our doomed hero at one point (carefully underplayed by Darren Munn), and there's a palpable sense of unease generated by watching the man passively listening to the recording of a sustained haunting (complete with Ghostwatch style disturbing voices). Although largely unseen Alice Keedwell is also convincing as the voice of the medium on the tapes - she also plays her sister Sarah in a brief scene. Aided by an extremely atmospheric soundtrack by the enigmatically titled 'Pig 7' - with help from Mansfield and former Video Killer actor Victoria Falls - The Demonic Tapes creates what is becoming a trademark urban horror feel from the director, but with the 'onion skin' approach to storytelling adopted by M R James, to whom Mansfield remains indebted.

The Demonic Tapes is available to stream on Amazon Prime now.
Posted by Dark Eyes of London at 02:50