Who says £5 can't bring you happiness? I wanted to enjoy some Hallowe'en thrills, but I wanted to do it on a budget. So I went to my local Poundland in Brixton and hoovered up five of their most promising DVDs, to have me my very own Poundland Hallowe'en. Here's what happened: 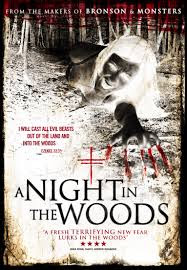 Film 1: A Night in the Woods (US 2007 Dir Richard Parry) Richard Parry made the not very good South West 9 back in 2001, a drama set on the streets of Brixton. Ten years later he made his entry into the 'found footage' sub genre, about a trio of hikers who head off into the wilds of Norfolk and spend, you know, a night in the woods. Hang on, I thought, I've seen this before. I even wrote a short review about it for another site, which went something like this:

"A few tips for budding 'found footage' film makers: 1. By the very nature of what you're doing you're ripping off The Blair Witch Project. It isn't necessary to set up bits of your movie that directly copy scenes from the original film. Try to avoid ripped tents (also tents messed about by 'unseen' forces), and senseless screaming (both from your main characters and the 'disembodied screams in the night' variety). 2. Your cast are filming on camcorders. Do not therefore actually film on much better equipment as it spoils the illusion (unless you can disguise the professional camerawork to look like cheap camcorder footage). 3. Never forget who's doing the filming. If there's a scene where all three central characters are being filmed (ie the only ones supposed to be in the movie) and no-one has a camera in their hands, then someone else is filming. This is not good. Same advice applies in the 'action' scenes. 4. To paraphrase Steve Martin in Planes, Trains & Automobiles, have a fucking point to what you're doing. It makes it so much more interesting for the audience. 5. Not a great idea to have lots of different music over the end credits for a 'found footage' movie. The ending's bound to be a bummer. Let silence do the work for you." 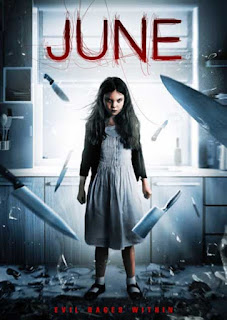 Film 2: June (US 2015: Dir L. Gustavo Cooper) Actually dating back from 2014, L. Gustavo Cooper's surprisingly watchable if very silly June is certainly a step up from his last genre effort, 2013's overly talky The Devil Incarnate. In a plot which bears some similarity to this year's Midnight Special (and also harks back to 1984's Firestarter), a young baby conferred with special powers is snatched away from a cult. Nine years later, as a young girl pursued by shadowy authority figures, she is placed in the hands of foster parents who gradually realise how special their adopted daughter really is, what with her ability to mess up the house in seconds and speak in a funny voice. We learn that the powers are supernaturally endowed (the little girl is possessed by an ancient demon) - and essentially that's the whole plot of June. It's thin stuff but reasonably enjoyable provided you don't think too hard about what's going on and can cope with the bargain basement effects work. Casper van Dien (Starship Troopers (1997)) gets credits on both sides of the camera for this one - maybe he sunk some money into it. Kennedy Brice is pretty effective as June. As a young actor she already holds an impressive CV; in fact her first appearance was at her birth, the actual footage being utilised in the 2013 movie Crackerjack. Nice. 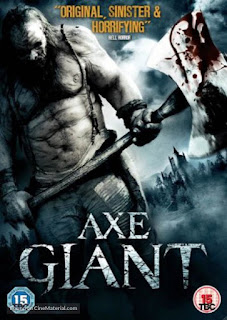 Film 3: Axe Giant aka Axe Giant: The Wrath of Paul Bunyan (US 2015: Dir Gary Jones) Hey, getting in the Hallowe'en spirit now! Or I was. Now I'm no expert on American folklore, but I thought the giant lumberjack of legend was a rather amiable fellow? So what the hell is this nonsense? Filmed in the rather beautiful California, Ohio and Michagan countryside back in 2013, the forest locations are about the only thing going for this. After the obligatory prologue set in the 19th century (although one guy's wearing a rather modern bomber jacket) featuring a group of hicks who get chopped up, we cut to the present day, where a bunch of young offenders are sent on an outward bound course as an alternative to imprisonment. The group is presided over by a 'yes sir no sir' ball buster and a counsellor. They end up staying at the very house where the prologue's massacre took place and pretty soon the giant form of Paul Bunyan rocks up (he's an average guy with a few warts but is filmed to make him look massive - he also gets to act against some terrible model work to unconvincingly emphasise his stature) and the CGI dismemberment begins. Axe Giant can't make its mind up whether it wants to be a comedy or a straight out horror movie and of course ends up being neither. Poor old  Dan Haggerty (The Life and Times of Grizzly Adams (1977-78)) is in it and Martin Sheen's younger brother Joe Estevez plays someone bonkers. Jones directed the better than average B movie homage Spiders back in 2000, so I was expecting more from this, but Axe Giant is a terrible, terrible film which even some casual nudity and a nine foot giant can't fix. 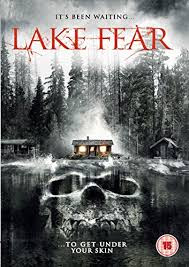 Film 4: Lake Fear aka From Beneath (US 2014: Dir David Doucette)  This is actually the 2012 movie From Beneath repackaged as something it isn't. What I think it is, judging from the regular scene fades, is a movie strung together from a number of webisodes. It's very uncinematic, the sound's all over the place, and the acting from the two leads is pretty awful, when you consider that apart from these two there's pretty much no-one else in the film.

Sam and Jason are heading out into the woods to visit Sam's sister and her newly acquired house. But when they get there, no-one's at home. Opting to take a dip in the lake, Jason gets bitten by a leech like creature which then burrows into his leg. Holed up the house, he begins to hallucinate. Sam meanwhile has found her sister, who is dead. And it looks like what killed Sam's sister has plans for Jason.

Lake Fear is quite a chore to watch, and despite David Doucette wanting to make something claustrophobic and unsettling, which is laudable, the movie is just plodding and silly. It also has a terrible soundtrack - I'm assuming the musicians were friends of the director. 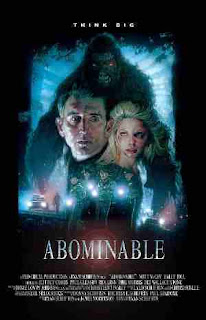 Film 5: Abominable (US 2006: Dir Ryan Schifrin) Yep, we're at the end of my Hallowe'en five for a fiver mini odyssey, and we conclude with the oldest of the movies selected. This was Ryan Schifrin's first feature (he went on to write and direct one of the segments in 2015's enjoyable Tales of Halloween). It's got a pretty good cast too, including Dee Wallace, Jeffrey Combs, Lance Henricksen, and Troma regular Tiffany Shepis - ok a good cast if cheesy horror flicks are your bag. And as an added bonus there's some quality soundtracking from Schifrin's dad Lalo, which to be honest sounds like it's strayed in from a much classier movie.

Yep, Abominable is pretty, well, abominable maybe too harsh, so  I'll go with barely adequate. Despite that title hook, the beast in question is actually Bigfoot The creature itself is an impressive bit of costume and prosthetics (the guy in the suit is Michael Deak, who as well as making special effects behind the camera, is pretty much the go-to guy when you want someone tall in a monster outfit). However the story is pretty hokey. A group of girls from the city take a house in the woods for a hen weekend, watched over - via binoculars - by next-door neighbour, wheelchair bound ex-climber Preston Rogers (played by Matt McCoy in his second Bigfoot film, twenty years after Bigfoot - the Unforgettable Encounter, which of course everyone has forgotten about). When Bigfoot arrives and starts picking off the party-goers, Preston shouts commands at them to help the girls escape. He becomes the hero of the day, eventually rear-ending the beast in his car and trapping it against the tree. However, in the darkness more sets of Bigfoot eyes look on - the story is not yet over.

Neither smart or pacy enough to get by as comedy horror, Abominable limps along rather episodically, only managing a soupcon of excitement towards the end. Most of the genre cast are rather wasted, although Jeffrey Combs should at least be singled out for being almost unrecognisable, dressed up as a backwoods bum.
Posted by Dark Eyes of London at 23:36

Email ThisBlogThis!Share to TwitterShare to FacebookShare to Pinterest
Labels: A Night in the Woods, Abominable, Axe Giant, From Beneath, June, Lake Fear